You get the quest "Revealing the Unseen" in the college of Winterhold, after completing "Good Intentions"

Locate Mirabelle Ervine at the College of Winterhold (Usually wandering near the Hall of the Elements or Hall of Attainment). Ask her if she knows anything about the Staff of Magnus. Tell her Arch-Mage Aren said she had mentioned it recently. Ask her who are the Synod. Ask her if noone here knows the location of the staff. She will suggest searching the ruins of Mzulft.

Your quest log has been updated:
"Mirabelle has told me that members of the Synod recently visited the College, mentioning the Staff of Magnus. They were last known to be heading towards Mzulft; They may know more about where to find the staff.

Objectives
Find the ruins of Mzulft

Fastest way to get to the Mzulft ruins is to hire a carriage to Windhelm and head Southeast. If you follow the road past Steamcrag Camp, it should take you there. Cut Northeast when you reach the stairs leading under the arches, then climb the stairs to the east. Enter the big golden door to go into Mzulft.

In the entrance, talk to Gavnus Pinius who will tell you the crystals are gone and to find Paratus in the Oculary before collapsing. Your quest journal is updated:

"At Mirabelle's suggestion, I entered the ruins of Mzuft searching for the Synod researchers. I found one man who died, and suggested that more people may be inside at something called the Oculory. I should head further into the ruins to see what's going on"

Your objective is to reach the Oculory.

Search Gavros Plinius. He has a Mzulft key and a  Research log showing he was there to deliver and focus some crystal in the Oculory. Unlock the door to the east using the Mzulft key. Go East, then North, then East, into a room with steaming pipes. Defeat the dwarven spider workers there. Go east up onto another room with cogs and spiders. Open the golden door on the east. Go up and open the gold door to the North. Kill the Chaurus in the caverns ahead. They can poison you, so be ready with some healing spells or potions. Keep going north, watch for the avalanche.

Exit the caverns in the corridor to the north through another yellow door, Go North, then east. You will be attacked by a dwarven sphere. There's a dwarven treasure room with an Adept lock, so pick it if you can. Then continue North, and East, to arrive at another gold door. Keep going north, and then east, and reach a big room with some stairs. Climb down the stairs. Climb down the stairs and go south for another treasure room. Go back up the stairs, and this time take the door to the North.

You will reach another big chamber. Exit it to the North. Then turn east. Go through the Mzulft Boilery door. Go east, then defeat a Falmer the North.

Exit the halls to the northeast. kill another falmer and turn north. The next room will have two falmers in it so be prepared. After killing them, enter the chamber to the east and go through an opening in the wall into some caves. Go through a narrow tunnel to the north.

Keep working your way north, past a cavern with a tent. Turn west after passing the tent. Follow the tunnels, then go east, then North past another tent. In the room with the glowing wall, exit it to the North. Pick the master lock if able, then continue north.

Head all the way west to the end of the corridor, then down some stairs. Get to the other side of the water, then open the door on the west side of the hall. Go west then north to get to the Mzulft Aedrome.

Go east, and then north. You will enter a big chamber with lots of enemies, so its better to pull them to the corridor from when you enter and kill them there one or two at  a time. IMPORTANT: Make sure to loot the Falmer Gloomlurker. He has the focusing crystal you will need.

From the big chamber, climb down the stairs to the east. keep going east through several doors, to finally arrive at a room with a dwarven chest containing the Mzulft observatory key. Go back up to the main chamber. This time go west, and  unlock the door using the observatory key you just found. Reach another door. It's locked, but Paratus hears you and thinks you are Gavros and unlocks the door for you. Tell him Gavros is dead. Tell him you are looking for the staff of magnus. He says he cant do anything without the crystal. Tell him you will find the crystal. Check your quest journal:

"At Mirabelle's suggestion, I entered the ruins of Mzulft searching for the Synod Researchers. I found Paratus Decimius who appears to be the only surviving member of the Synod Expedition, and who has insisted that a "focusing crystal" is necessary to finish his experiment but was stolen by the Falmer."

Your objective is to find the focusing crystal. If you have it, give it to Paratus. Otherwise go back east to the main chamber to loot it from the falmer boss.

"Exploring Mzulft while looking for information about the Staff of Magnus, I've encountered Paratus Decimius, the sole surviving member of a Synod expedition. I've found the focusing crystal he needs to finish his experiment and should return it to him"

Objective: Return the Crystal to Paratus.

Tell him you have found the crystal. Follow him to the Oculory. Climb up the ramp. Place the crysal in the center apparatus to start the process for focusing.

Place the crystal into the Oculory by going to the center and activating the dwarven armillary. Now you need to focus the Oculory. Heating or cooling the crystal will cause it to expand or contract which will change how the light passes through it. You'll need to use spells to do that. You should have fire and ice spells, but if not then there are tomes around.

"Paratus Decimius may know the location of the Staff of Magnus, but has asked for my help in completing an experiment in Mzulft. I need to use magic to attenuate Paratus' focusing crystal, and then manipulate the dwarven machinery to line up the beams of light.

This is a PUZZLE.

SOLUTION TO FOCUS CRYSTAL PUZZLE:
Equip a ranged fire spell such as Flames in your right hand, and an ice spell such as frostbite in your left hand. stand underneath the lenses.

Observe that there are three rings in the ceiling. Each beam should point at a different ring. If its not, shoot a fire or cold spell at the lens to adjust its position. Then, go up tp where the three buttons are. The left button controls the upper ring, the middle button controls the middle ring, while the right button controls the lower ring. Press each button to rotate the mirror on each ring so that it gets to the position of where the beam is shining on. Look at the screenshot below, from just before focusing the last lens. One beam is hitting the lens in the upper ring. A second beam is hitting the lens in the middle ring. Then what is left is to rotate the bottom ring so that the mirror is where the beam is pointing on. 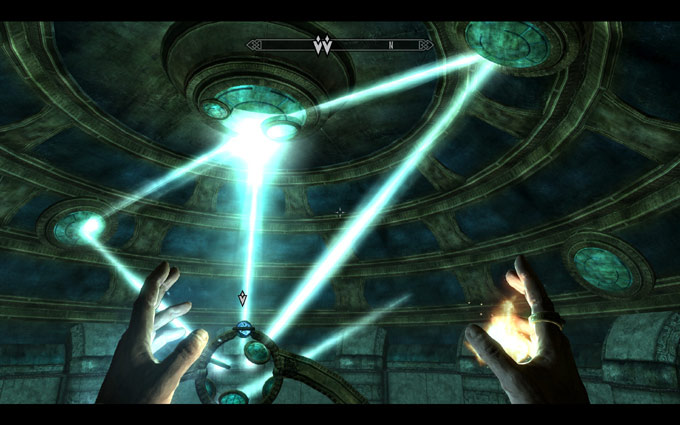 After you focus the Oculory, talk to Paratus.  He is upset that he did not get the results he expected.Tell him to calm down and that you haven't done anything. Tell him about the eye of Magnus. Ask him to help you find the Staff of Magnus. He will tell you the Staff of Magnus is in Labyrinthian:

"Traveling to Mzulft in search of the Synod, I found Paratus Decimius who helped me learn that the Staff of Magnus is located in Labyrinthian. This information needs to get back to Savos at the College immediately."

Your objective: Report to Savos Aren

Go down the ramp. Move east along the corridor. Suddenly the apparition of Neriel appears and tells you that you have to reach the college fast and that you will be challenged to see what you are capable of. The door in the hall to the south will now be unlocked. Exit to Skyrim and fast travel to the college of Winterhold. Go into the hall of the elements. There is a ward inside blocking the entry to the chamber with Eye of theMmagnus. Savos and Mirabelle are there, trying to break the ward. Talk to the archmage and ask him what is going on. He will tell you Ancano is in there doing something and to try and help take down the ward:

"After traveling to Mzulft and learning that the Staff of Magnus is located withing Labyrinthian, I returned to the College to give news to the Arch-Mage Aren. Aren, however, is more concerened with the Eye of the Magnus at the moment, since Ancano has locked himself in the Hall of Elements with it. I need to help the Arch-Mage reach him at once"

Cast spells at the ward to help Aren and Mirabelle bring it down. Enter the chamber.

Aren will approach Ancano. There will be a big explosion. Mirabelle will be down on the ground. Savos is no where to be seen and must have been blown away and injured from the explosion. This ends the College of Winterhold quest "Revealing the Unseen" and starts the next one, "Containment".