RarityGuide.com - http://www.rarityguide.com/articles
See through Samus's Eyes: Metroid Prime is in your sights
http://www.rarityguide.com/articles/articles/83/1/See-through-Samuss-Eyes-Metroid-Prime-is-in-your-sights/Page1.html
Douglas Shepard (Editor in Chief, RarityGuide.com)
By Douglas Shepard (Editor in Chief, RarityGuide.com)
Published on 02/27/2009
The first Metroid game to feature the First Person Perspective. While shooting is still an element, this game is better defined as First Person Exploration. Suit up and see what Samus has on Tallon IV!
System: Nintendo Gamecube
Title: Metroid Prime
Publisher: Retro Studios/Nintendo
Circa: 2002 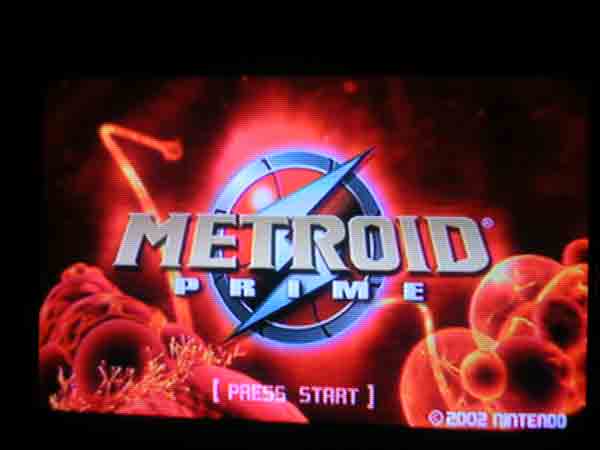 Intro
After a very long break (8 years), Metroid fans could rejoice as their Bounty Hunter returned to the scene with Metroid Prime. It was the first Metroid game to venture into a new format. While some people didn’t take to it, many did as it held true to many of the elements that made Metroid so good in the first place. Set between the first two Metroid games the game explores more of Samus’s past and builds something of a back story for Super Metroid. This game also featured connectivity with Metroid Fusion. Linking with Fusion unlocks the original game of Metroid for the NES. It also, once you beat the game, allows you access to the Fusion suit. It’s a purely cosmetic change in the game, but a nice one.

StorySamus responds to a distress signal of a frigate in the vicinity of Tallon IV. A little after her arrival she finds that it’s a Space Pirate frigate investigating the nearby planet for reasons unknown. As she investigates she finds Chozo Ruins and what killed all the Chozo, the agent known now as Phazon. It’s shown to be malevolent and at least somewhat intelligent. The Space Pirates seek to harness the Phazon, increasing their combat prowess, creating new breeds of Pirates and enhancing the fearsome Metroids.

GameplayThe game is more action than shooting, though there is a good bit of that. Metroid has always been about exploration and the 3D arena just gave the developers more places to hide things. At least they did make it easier to track if something was in the room with a distinctive sound you could try to follow to find the item. Still, items were usually the way to gain access to new areas and to expand on your items. 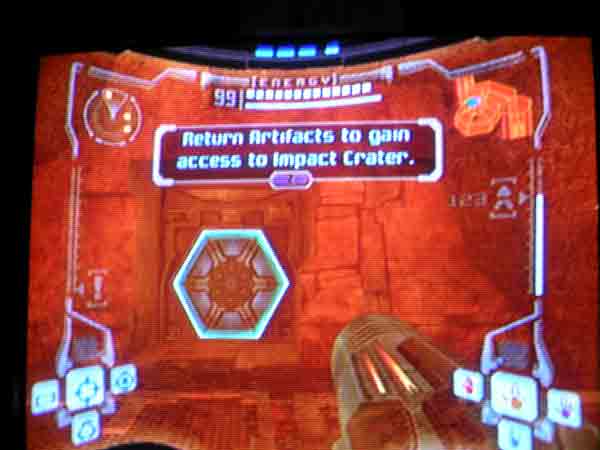 Many of the original items remained staples of the series, they just were shifted to be used in different ways. Some items are encased in ice and can only be thawed using the Plasma Beam. Other require you to power up doors to access them, mandating the use of Wave Beam. Space Jump saw a huge change in that it only added a single jump (for a fan-base used to unlimited jumps it wasn’t a great move, but it did add a new element). The grapple beam made a triumphant return in this game as well, allowing Samus to reach otherwise inaccessible areas and proving essential to several puzzles. The proper block types remained, but were replaced somewhat by structures containing different elements that the weapons could affect.
Easily the biggest change to the game series was the shift from completion time to completion percentage. By collecting all the items you earned the best ending whereas previously items didn’t matter, only beating the game in the lowest possible time. This encourages all the players to take their time and scan/find everything. It also allows for the more complex mode of 3D navigation which is, at times, much slower to navigate than the traditional 2D mapping.
Scanning was the most unique addition to the game. It’s easy to see why, as many things changed within the game world and playing without a strategy guide, someone would need the scan visor. What it did was take a few seconds of targeting with the Scan Visor to get information on the subject. This also allowed for a different source of information to add more to the back story of the game. 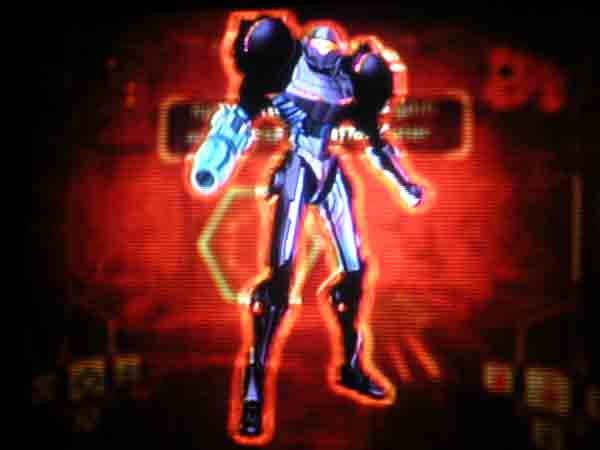 Controls
The controls only seem like a bit much at first. After some item of play it’s easy to see the benefits of the changes. The thumb-stick is used to move Samus around while the L shoulder button is used for scanning and locking on. The R should is used to move the view Up/Down as needed for targeting or sizing up an area. The C-stick is used to change which beam is used while the d-pad changes the visors. After only a little while of gameplay, these controls become second nature. The Gamecube controller lends surprisingly to the control mapping here. This scheme just allows for ease of use, making it very possible to track, jump and charge-shot all at the same time without much difficulty at all.

Graphics
This game is quite beautiful. It’s easy to enjoy the game just visually. The lighting effects are great. Easily this game wins marks for the fact condensation accumulates on her visor, the poison spit on her shows there, lava and water will roll off as well. Many enemies have something of a death animation and they make sense as well. The monsters frequently look very real as well, adding something to the sense of danger.

Sound Effects & Music
This is one of the few games I intentionally downloaded the entire soundtrack from. None of the music grates on you; in fact it makes a wonderful ambient atmosphere. It’s easy to just forget about what else is going on simply because of how immersive it is. The sound effects help at lot as well. None of them ever really grow old and frequently are very helpful for someone venturing through the mazes of Tallon IV.

Obscurity
Not really that obscure now.

Summary/Author’s Take
The game itself is something every person with a Nintendo Wii or Gamecube should have in there collection. It offers a decent sized area to explore, though the lack of rapid transit between some zones could be a bit tedious for some players. While its by no means bad, this could wear some players down. Still, having had this game since its release and only recently having replayed it, it's easy to remember everything that got me hooked on the initially. Even with 2 more entries to the series since then, I still find this one the best of the bunch. Sometimes it's the fact it was the first one in the series, setting a new standard, but for me, it was how the story was told through the log books found through and the need to collect more than just items. This is one game I'll probably always hold onto and replace when the time comes, again and again.