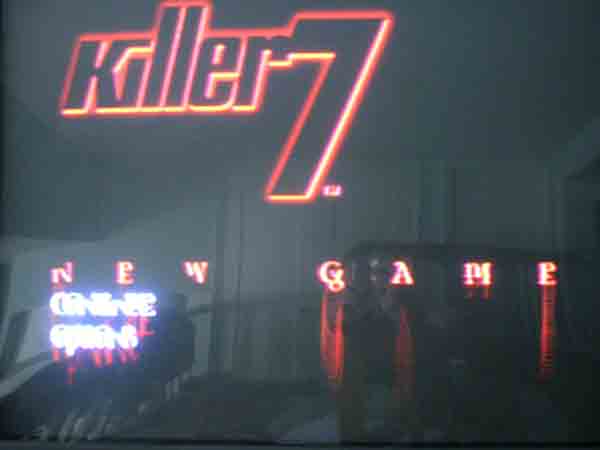 Intro
“May the Lord smile”
“And the Devil have mercy”

Okay, this is easily one of the most notable games to show on the Gamecube (it also came out on the PS2, but it lost a lot!). It’s also hard to sum up in any real manner in the conventional genres. This also means this game is very Hit or Miss, with no real middle ground. A number of friends said I should play it and only after a few times physical threats were involved. I got lucky to find the game (thus no longer having to worry much about physical harm) after it came out at the local game store used for a good price and grabbed it. I have no idea how long I played it, but it was awesome, crowned by the gameplay. This game is the first M rated to be reviewed here and I will say that this game got that rating for a good reason (Cursing with gallons of blood and dismemberment). It’s one of the quiet games you just try one day and find it’s already the next day with only two missions done and sunlight starting to show. 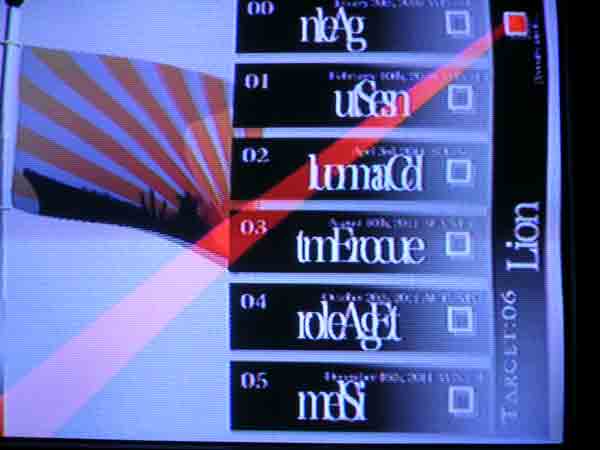 You are one of 7 personalities of Master Harman, a Godly assassin working directly for the Government to deal with the only remaining Terrorist Organization: The Heavens Smiles. These are created by Harman’s rival Kun Lan. Unlike the usual multiple personality disorder these manifest in a completely independent body. You play as Garcian Smith, the dominate persona of the total 7. Through the medium of blood you can transform into any of the other 6 personalities. 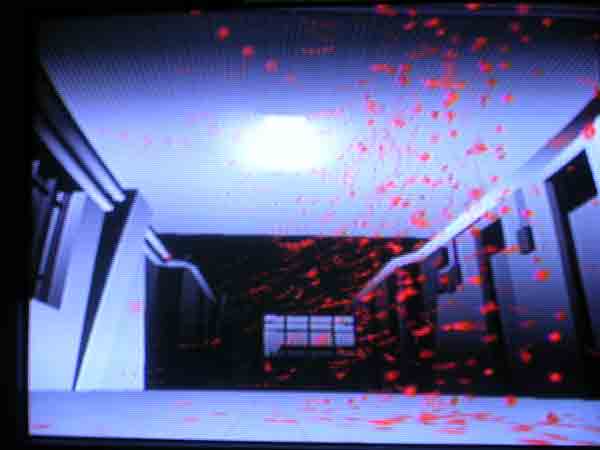 Gameplay
We got rails, first person shoot and puzzles to kick it off. The game starts in the third person perspective, with you only able to go forward, turn around, shift into first person view, and scan the area. The Heaven Smiles are delightful lunatics who laugh manically whenever they show up so you always know some things are there to kill. Most characters have their own weapon, but all of them have unique ability useful at doing something. Coyote can leap high and pick lock, though he shares a lot of similarities with Dan who just puts lead in all the right places and is the connected character who knows people. Kevin is quiet, turns invisible and the only one who uses throwing knives for quick killing and no reload. Con is one of the two dual wielders, has sonar, can ran like the wind (he really can) and being the youngest is useful for some gaps. Kaede is the only girl, but my favorite of the cast as the sniper and could use her blood to break down barriers. Last is Mask De Smith. While all of them have Smith as their last name, Mask De Smith is the only one who merits strong mention of it. He has brute strength to crush obstacles that get in your way and dual grenade-launchers for weapons. Any personalities that start a mission locked can be unlocked by killing a certain number of Smiles.
The third person perspective is the most limited in that you can only go forward and turn around, but it’s still useful. The rail system directs you to every location and has a very simple system for you to navigate around with. 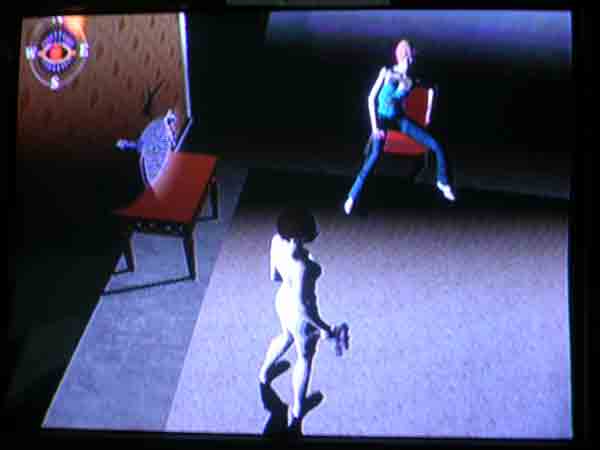 The map you can access becomes a great friend as it shows hints to solve some of the puzzles and helps you get around the massive area. While the most limiting, it also is the most helpful part of the game. 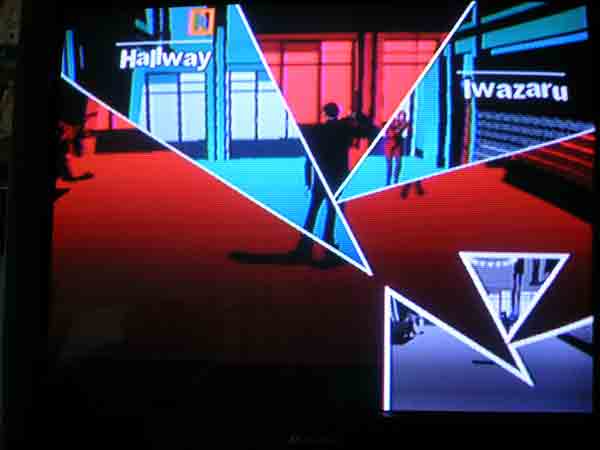 In the first person perspective you do all your scanning and shooting. Scanning is necessary to see your foes as they really do blend in that well but you can hurt them unless you can see them. Knowing where to shoot for the one shot kill relies on an acute eye and a bit of practice. Still the one-liners from each of the characters are a nice reward for the kill. These kills also net you Thick Blood, which is used to increase the personality’s traits, improving their aim, firepower, fire rate and unlocking abilities. While the first person perspective is only used for shooting, having to change between the third person rail and the first person shooting makes for very challenging game play on just the strategic level. Knowing when to change views in a boss fight can be critical just as readily as it can in many of the areas of the standard level. 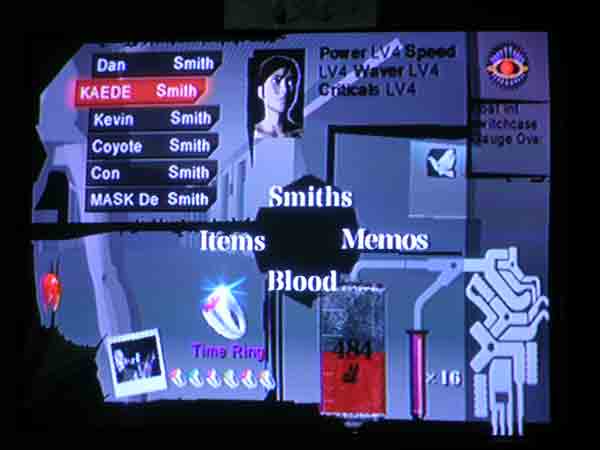 The music and sounds also work in your favor to locate the puzzles and know at least there’s something to do here.

Controls
They seem complex in the manual, but the manual also has plenty of good reading in it. The game offers a wonderful tutorial which helped me get the basics of the controls down fast so I could start into the Heaven Smiles. It takes some patience to get used to some of the smaller nuances in the game, but each bit adds up and soon there isn’t much you can’t do.

Graphics
The game is done in Cel-shading, but what they do is incredible. The style just fits perfectly with the game and it helps the atmosphere of it. While dark, the shading does an incredible job with many things. The game also features SHORT animated cut-scenes which explain an incredible amount of what’s going on and the impacts of your actions. The enemies even camouflaged still have their full shape and are every bit as physically complex as their revealed form.

Sound Effects & Music
Get the soundtrack. No part of this game prompted me to add-in my own soundtrack and there were tracks I’d simply leave on for a while just so I could enjoy them. The sound effects never really get old, probably because it seems impossible to get a gun shot wrong and all the laughter invokes is “Okay, where’s the Smile?”. The music also does a great job of priming you up for the boss fights or helping you get immersed into the game. Most of the sound effects are guitar sounds done in different styles, but each are easy to distinguish from one another and none are used to the point of redundancy.

Obscurity
Decently. I only hear a few people talk about it around its release but after that it seemed to get committed and vanish.

Summary/Author’s Take
This is easily one of the best games I’d played in quite a long time. There was a lot of game play, a few secrets and plenty of things to get me to recommend this game to friends with Wiis or Gamecubes. This game took what the Gamecube could do and maximized it. With simply how well the cel-shading worked for it mixed with the awesome music. While a wonderful game it definitely is for mature, grounded audiences. Parents, look into this game first. Everyone else, ENJOY!