Once character creation is complete, you will come to inside a cell within Coldharbour. First thing to do is search the cell. You can poke around or just head for the cell door. Do that for  a vision of a man will appear before you:

Interact with him and he will explain a few things. He will explain that your fate and his are intertwined. Whatever is going to happen involves both you and him. Stay by the door after he vanishes as an Argonian is coming along and picking the lock: 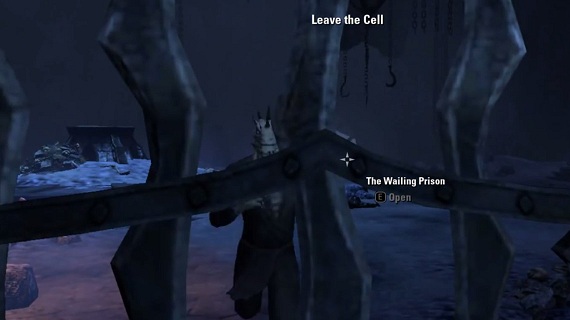 When he finishes, interact with the door and head outside. Go straight across the room and into the tunnel opposite you. Run down it for a while. This will lead you right to a small armory:
Head over to the table and grab the weapon there. They are all Cast-off Iron swords. No reason to spend much time on it. Go into your inventory and equip the sword
Head through the rest of the room and go on into the Bleeding Forge. Ahead on the left you will see your first foe, a skeleton:

Approach him and begin attacking with your sword. It should go down without too much trouble.  Mix up your attacks between light and heavy to get a feel for the timing difference in them. If the skeleton starts to use its power attack, you will be prompted to block. Just hold the indicated button to reduce the damage coming in from the attack. Be sure to take a moment to loot the corpse of the skeleton. Continue to the East after that. This will lead you to the next part of the Blood Forge.

Through the next door you have another Skeleton to deal with on the left. This time you are shown how to interrupt their attacks. Look at the prompt to learn just how you are expected to do this. This works to do some damage and disrupts any incoming special attack. It does take a fair bit of stamina do use it carefully. Defeat this foe then turn to the East again. There you will find Lyris Titanborn: 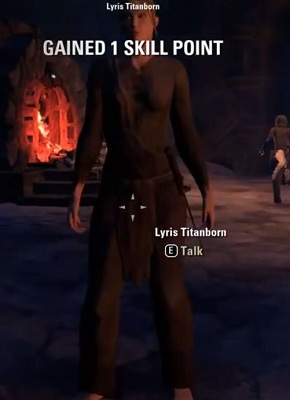