RarityGuide.com - http://www.rarityguide.com/articles
The gale of Dreamfall: The Longest Journey
http://www.rarityguide.com/articles/articles/50/1/The-gale-of-Dreamfall-The-Longest-Journey/Page1.html
Douglas Shepard (Editor in Chief, RarityGuide.com)
By Douglas Shepard (Editor in Chief, RarityGuide.com)
Published on 12/7/2008
Three peoples stories intertwine across space and you are along for the ride.
System: Xbox
Title: Dreamfall: The Longest Journey
Publisher: Aspry/Funcom
Circa: 2006
Overall Rating: 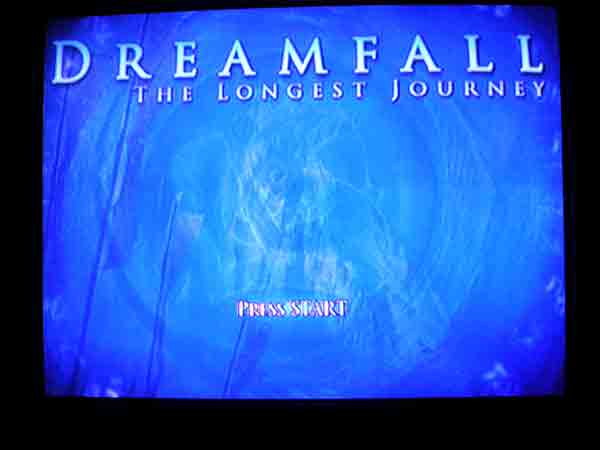 When you’re around video games as long as I am everyday, there can be the odd title that, by chance, catches your eye. It’s very ironic in this case with the game “Dreamfall” because that itself is about destiny and fate. For me, it was the simple cover and the back; it just seemed to be a game that I could like for no real explicable reason. After a little time debating it, I checked it out to try. The days I had the game seemed to just slip-by and before I knew it I had to return the game. Then, I didn’t have the money to buy it and when I did, it was sold. At first it seemed that it was just slipping through my fingers, it would be in stock but I would forget to buy it as I left. Always it seemed to just vanish like a vivid dream, gone just a few moments too soon. Eventually though fate smiled and visiting some friends at another store had me find the game once again. This time, I had no excuses and nothing to compel me, so I bought it to continue the journey that I had started in it several months before. For a while after that, I just didn’t have the time to play as other obligations (and games) stood in my way, then I made the choice to sit down and play “Dreamfall” again. Before I knew it, my eyes were drooping closed but the story was compelling me on and making me promise myself to play it again the next night.

“10 years ago, something happened.” What, no one is sure but those days seemed to have humanity in its grasp and on its knees. The world stood still as we found ourselves caught by something: silenced, unable to reach anyone both on the planet and beyond, in the stars. The time passed as mysteriously as it came. The societies of the world slowly came to terms with the mystery. They accepted that they were just there on Stark, no longer able to talk to those beyond the stars. Slowly everything returned to normal and eventually life resumed its own pace.

Unknown is 10 years ago an 18 year old art student gave up everything to restore the balance between two worlds. April Ryan found out she was a Shifter, someone who could travel between two worlds as easily as anyone else can stroll through a park. She restored balanced and put all to rights then seemed to vanish, shifting somewhere. Now, something again is threatening the worlds and April finds herself along with two others, Zöe and Kian, drawn together to try to right it once again.

The game follows the stories of 3 characters: Zöe Castillo, April Ryan and Kian. Each has a role to play and find themselves drawn together slowly for reasons unknown. Zöe is looking to find out what happened to her now ex-boyfriend Reza who was investigating something and seemed to just vanish. She finds herself restless, unsure about the future, herself and her life. Now though, a veil seems to be lifting as she is drawn deeper into something spanning the globe trying to find Reza.

April Ryan lives in struggle. She seems to struggle against something and uses the call for action in her adopted home-world, , as a means for dealing with it. The years have found her disillusioned about many things including humanity. She fights the war in as she fights inside herself.

Kian is a zealot. Unyielding, unshakeable and deadly, he is the silent blade to “convert” the most ardent of opposition. He sees his religion as the answer, as the way. The question there is how does he fit, what is this man’s role.

The manual for this game gives a lot of good back-story honestly. I’ve given my take and what I know about the game so far. Also worth noting is this game is a sequal to the game “The Longest Journey”. While is obviously hinted at in the manual (I didn’t read it until I was sitting down to write this review), the background knowledge from the first game is not necessary to enjoy this one in the least. The game’s story stands on its own and is still very enjoyable.

I had to think quite a bit to really figure out just what to say genre this game fits in. The answer though was simple thankfully, puzzle and mystery. I can definitely say that anyone who enjoys fantasy novels with hints of mystery (like Niel Gaiman’s “Stardust”) will, like me, get sucked into the game and find a quiet urge to play.

You will be changing between the three characters throughout the story. What merits mentioning is while the transitions can be somewhat abrupt, they are not out of place. They also are usually accompanied with a change in the style of play as well making for better variety within the game itself. As far as I’ve played, it mostly has been as Zöe with small parts as April and only one segment as Kian. The segments slowly have been interweaving but there still are a lot of questions left for me.

Several of the puzzles have been difficult to get through, but after consulting a hint-guide it became very obvious. I was also immensely grateful that combat was very infrequent in the game as well as the auto-save feature could satisfy even the most paranoid gamer with its regularity around the solutions or progress of things.

With Zöe is how I’ve seen the most puzzles frankly, just talking with people to try and learn about Reza and whatever it is he was investigating. Honestly, it’s been with her that the back story has been revealed to a decent extent that I felt informed about the past happenings.

With April and what little I’ve played as Kian, there is much more fighting. April has been much more learning about the happenings in while with Kian, well, I’ve just started and very eager to find out more.

This is a game where the story builds and slowly ties itself together. While I’ve frequently had to talk a lot, struggle through puzzles and deal with the occasional fight, it’s a game where I’m not forcing myself to play to simply get through. The characters give reasons themselves to keep going as well as there are always the quiet whispers in the story that seem to hint at something much larger than what you seem that is coming into play.

This is a game where having the manual is helpful for understanding all the controls. It wasn’t hard for me to remember everything I needed to for the fighting system (save for blocking which I learned I’d completely forgotten) or to navigate through the inventory using the d-pad while controlling the character with the Left Thumb-stick and the camera with the Right Thumb-stick. Thankfully there are no character-specific commands that anyone needs to know.

I can honestly say “Wow” for some of the things I’ve seen in this game. The characters move very well and react to the environment throughout the game. Each of the areas has an obvious style and one I certainly have found myself taking a few minutes, not moments to simply appreciate aesthetically. Zöe standing in the rain is obviously just that or April fighting on ice with lazy snow flakes drifting down almost gives you a bit of a chill. The Xbox can handle a good bit graphically and this was well used in this game.

I intentionally held off with the music here. This is where the game got some serious recognition as its soundtrack was a nominee for MTV’s 2006 Music Video awards for “Best Video Game Score”. I would have to agree with that. The music is there constantly adding volumes to the game itself. I never really thought about it until now, but it really couldn’t be any other way. It gives a lot to the story and to the characters from understanding their mood to at least something of their thoughts. Frankly, this was the best received part of the game. Give it a listen, you’ll understand why.

It isn’t the most popular kid on the block, not everyone seemed to know about it, but those who did recalled it well.

A fantasy novel in video game form is the best way to describe this game. The story is very rich and complex without being overwhelming. You know what you are doing and the why of it. Honestly, if obligations didn’t have me writing about the game I’d be playing it. I’m not about to let my copy of this game go without getting some more serious play-time in so I can finish it! After that, I’m making/lending it to some of my friends so they can get a taste of it. Everything seems to just link and calls for some patience to get all of the answers. It is a game that takes time, but one that rewards well with the time spent.