Let me start with a confession. Qix is one of my all time favorite games. You might be asking, what's the deal with that game anyway, it's all about drawing some lines and making shapes. Yet the simplicity of it, and at the same time the challenge it offers is what has always drawn me to it. This is the review of the Atari Lynx port, one of the earlier ports to a handheld platform. And so, it is with much pleasure that I bring you this review...

Let me start with a confession. Qix is one of my all time favorite games. You might be asking, what's the deal with that game anyway, it's all about drawing some lines and making shapes. Yet the simplicity of it, and at the same time the challenge it offers, is what has always drawn me to it. This is the review of the Atari Lynx port, one of the earlier ports to a handheld platform. And so, it is with much pleasure that I bring you this review.

I read the manual that came with the game, and could not find a story. The back of the box reveals that there's Qix and its mutant offspring Sparx and you have to claim their territory before they frag you.

If you are not familiar with this game, think of Etch a Sketch. That's right, Etch a Sketch. All you have to do in QIX is basically draw shapes on the screen. But, there are those who wish to deny you the right to drawing these shapes. Those who seek to trap and electrocute you. Let's meet the cast of Qix, an interesting group of fellas. First, we have YOU. You don't have a name, you're just this small, diamond shaped icon. Next, we have the notorious QIX. Qix is a spinning helix, moving erratically around the game field. Next, we have some SPARX who wander about the play area. And last but not least, we have the FUSE that follows you if you decide to take a break while drawing a shape.

When the game starts, you have an empty field consisting of a rectangular area. Your goal is to draw boxes in the play area, thus claiming your territory and trapping the Qix. The Qix moves about erratically from one place to another. When you draw a box, the side in which the Qix is not in gets colored, which means you have claimed it. However, if, while drawing the box, the Qix touches the line you are drawing (Called the Stix), your icon is destroyed and you lose a life. But that's not all. Sparx wander about the play area, along the edges and later also follow you along the Stix you have drawn. If any of the Sparx touch you, then you're also destroyed. And, if that's not enough, there is the Fuse. When you are drawing your Stix, do not stop to hesitate, not even for a moment. For if you do, the Fuse will ignite and close on you, following the line you have drawn. And if it catches you, then, guess what?

As you survive all these traps and claim most of the territory, you advance to more difficult levels, which require a larger percentage of  territory to conquer and have more intelligent Sparx, deadlier Fuses, and even a second Qix!

Game is very fun, very addictive. Each time you play it, it is different. According to the manual, there are over 1 billion patterns to be made! 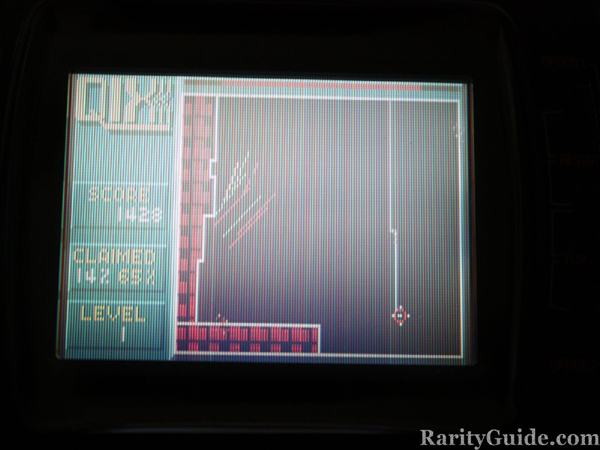 There's a 2 player mode, but it just consists of taking turns playing the game.

Controls are straightforward. The directional keys move your marker around. Pressing the A or B button allows you to start drawing a Stix. If you  release the button after starting to draw, you will draw the Stix faster. If, on the other hand, you keep on holding the button, you will draw more slowly, but receive more points. Still, the Atari Lynx buttons make this game harder to control compared to the console or arcade counterparts, requiring keypresses to be a lot more precise. This sometimes made it harder for me to go to where I actually wanted to go, or even jam on the occasion, and this helped the Qix, Sparx and/or Fuse catch up on me.

This is a faithful adaptation of the Qix from the big console. The graphics use all the advance graphic capabilities of the Atari Lynx.

It's a classic game. Asking around though, I was surprised that not that many have heard of it. This has got to change.

I handed over the Lynx to my friend who has never heard of this game before, and he immediately got hooked. After a few hours I had to pry my Lynx back out of his fingers.

So go pick up this game and play it!

Game is very fun, challenging and addictive. Has a high playability value. Each game you play will be different. It's hard to describe the feeling of suspense as you start drawing your Stix. Will the Qix behave and stay in a predictable pattern, or will it, in a blink of an eye, storm over from all the way across the playing field and hit your line? And it is even harder to put to words the feeling of satisfaction when you manage to trap the Qix in a tiny box, thus filling up and claiming all the rest of the playing field in one go!

The Atari Lynx port of Qix is a faithful adaptation including with all the features from the console and arcade versions. Controls are not that smooth compared to its console and arcade brothers, but you can accept that as part of the challenge. The handheld version makes it great to play whenever you are on the go.