Intro
The Prince of Persia was a classic game released for PC and Mac, as well as NES, SNES and other consoles of that generation. It offered a surprising amount of difficulty, with its many unforgiving traps, leaps of faith and of course, the 1 hour time limit. After an extended hiatus, the series made its return to the console with “The Sands of Time”. Obviously, the Gamecube version was used for this review.
There were very minimal differences between the versions for PS2, Xbox and GC. Mostly that GC has the original Prince of Persia loaded on it while the Xbox has Prince of Persia 2: The Shadow and the Flame.

Story
The Prince of Persia comes in an attack on the Maharajah of India, lead by his father with the help of a treacherous Vizier. The pair then head for Azhad, where they were to stay a while. They took with them from India the Dagger of Time and the Sands of Time. The same Vizier takes advantage of the Maharajah of Azhad’s curiosity to entice the Prince to open up the Sands of Time and unleash them on the Palace. The Prince finds himself, the Vizier and a mysterious girl, Farrah, to be the only “survivors” from the sands being unleashed.
The characters are well developed and usually you’ll care at least a little about the characters. Some of the Prince’s lines in his monologues (and the occasional dialogue with Farrah) prove to be very entertaining.

Gameplay
The key factors in this game are agility and cunning. The Prince also has the Dagger of Time, powered by the sands he collects from defeated enemies. Many powers are dependant on defeating enemies and absorbing them. As well as the Dagger has 2 sets of powers, some using the main tanks (enhanced by finding special caches of Sand) while others use a sub-tanks (extra-tanks gotten by absorbing enemies). While there are only so many powers ultimately acquired of the course of play, all serve well both in and out of combat. It can reverse fatal mistakes in navigating the terrain as well as help in keep the Prince healthy and fit in battle, letting you rewind to heal or to correct a series of just silly mistakes. 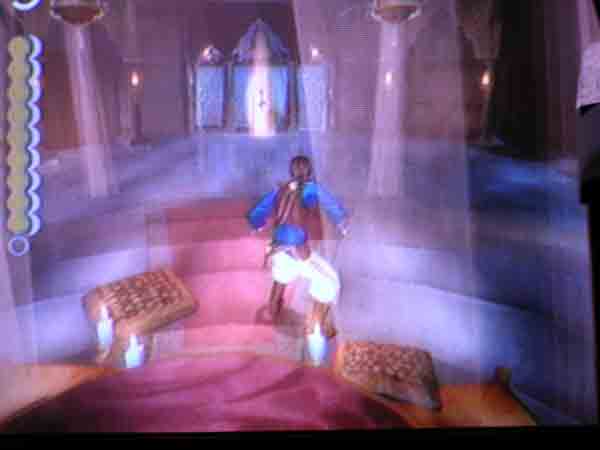 Controls
The basic controls take some time to get and comprehend fully. While the game has a tutorial for one to learn the controls, some of it still requires practice to fully master, such as the block-counter system. The Sands of time are simply a matter of practice as well, with some of the abilities only so useful unless used in the right situation.
Many of the Sand-based powers though, while simple to use, only work to make the game easier, which is very useful for first-time players. It’s easy to scale the difficulty simply based on how one uses the Sands.

Graphics
As the first in the series, it shows. While not excellent, the graphics scale with the system, with the Xbox having the best. For the time, they were well done. The art is well defined and is easy to figure out where to go with just some looking around. The effects are very well done, making the water quite believable as well as the particle effects for the sand are simply amazing. Even after a long time between plays it was easy to simply enjoy them.

Sound Effects & Music
Some of the effects can get somewhat repetitive, mostly one will be thankful for the fact that the Prince doesn’t have one-liners for after his kills. The only times the Prince really talks are in his monologues or dialogues with Farrah. A lot that though is important, letting the player better understand what’s going on. Thankfully, its good voice acting and not something awful. The music on the other hand is very atmospheric and well done. This is one of the games I bought the soundtrack for and still went out of my way to get a few variations of it.

Obscurity
This game loses out big time. As a recuperation of a much older title, it had a broader fan-base to draw from as well as it was well advertised. While I haven’t seen too many copies of late, it’s not completely obscured yet.

Summary/Author’s Take
Even after many years and having beaten the game on at least 2 previous occasions, it was still fun to play through the game completely again. A lot of what originally got me into the game remained there. While it wasn’t hard to remember what to do, it wasn’t as challenging, save in combat, to achieve my intended goals. Still,