RarityGuide.com - http://www.rarityguide.com/articles
Skyrim Walkthrough Part 11: Alduin's Wall
http://www.rarityguide.com/articles/articles/1039/1/Skyrim-Walkthrough-Part-11-Alduins-Wall/Page1.html
chronodev (Ron)
By chronodev (Ron)
Published on 11/17/2011
Walkthrough for the quest "Alduin's Wall" in Elder Scrolls V Skyrim, part of the main story campaign. Includes the solutions to all the puzzles.
After locating Esbern in the Ratway Warrens under Riften for the quest "A Cornered Rat", he tells you about Alduin and the prophecy. When he learns that you are the Dragonborn, he wants you to take him to see Delphine immediately. This begins the quest "Alduin's Wall"

Open your quest journal:
ALDUIN'S WALL
I've gotten to the Blades loremaster Esbern  ahead of Thalmor, I hope he's as knowledgeable about dragons as Delphine promised.

Talk to Esbern. Ask him if he knows the way out of here. He will then start running through the ratway. Follow him through the tunnels and the Ragged Flagon all the way out to Riften. Fight the Thalmor agents you encounter on the way. You might also come across Shavari, a Khajiit assassin sent by the Thalmor to assassinate you. Kill all enemies and make sure to protect Esbern, since if he dies, the quest will fail. If you don't see Esbern he probably ran ahead of you. Make your way alone out of the ratways and he will be there when you exit.

As soon as you are out of the Ratway. fast travel to Riverwood. Lead Esbern to Delphine's hideout at the Sleeping Giant inn.

Esbern will mention SkyHaven temple, where Alduin's wall was built, on which they accumulated all known dragon lore. Alduin's wall was where the ancient Blades recorded all they knew about Alduin. Part history, part prophecy. Its location has been lost for centuries. Alduin's wall holds the key to defeating Alduin. Delphine knows the area, known as Karthspire, in the Karth River Canyon. Ask her what's the best way to get there. she will say that from Riverwood, the road south through Falkreath is the most direct route. Or you could catch the carriage from Whiterun to Markarth and then approach from the west. Tell them you will meet them at Karthspire. Might be safer to travel separately, attract less attention. They will be waiting for you there. Check your quest log:

"I found the Blades loremaster Esbern and brought him to Riverwood to talk to Delphine. He believes that the secret to defeating Alduin will be revealed by Alduin's Wall, an artifact created by the Ancient Blades. We need to go to Sky Haven Temple to find Alduin's Wall and see what it can tell us"

Fast travel to Whiterun, then hire the carriage to take you to Markarth. From Makarth, travel east. Follow the road, crossing two bridges. After crossing the third bridge, you should see Delphine and Esbern, probably fighting enemies or a dragon. Kill the Forsworn in the area, and enter Karthspire.

Head west through the tunnels. Climb some stairs. You will have arrived at a place with a raised bridge, and three pillars. This is a PUZZLE.

ALDUIN'S WALL PILLARS PUZZLE SOLUTION:  Set all three pillars to the symbol of the two dragons with the arrow (Drabonborn symbol) (See Screenshot below) 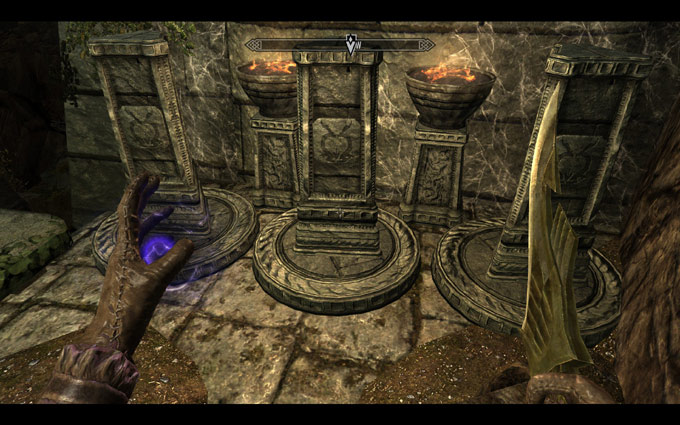 Cross the bridge and climb the stairs. You will arrive at another puzzle.  This is a PRESSURE PLATE PUZZLE

SOLUTION TO PUZZLE: You have to step only  on the plates with the Dragonborn symbol on them (Two Dragons with down arrow in the middle). Stand on the ground, pointing towards the first Dragonborn symbol. You should be pointing to the west (See screenshot below). 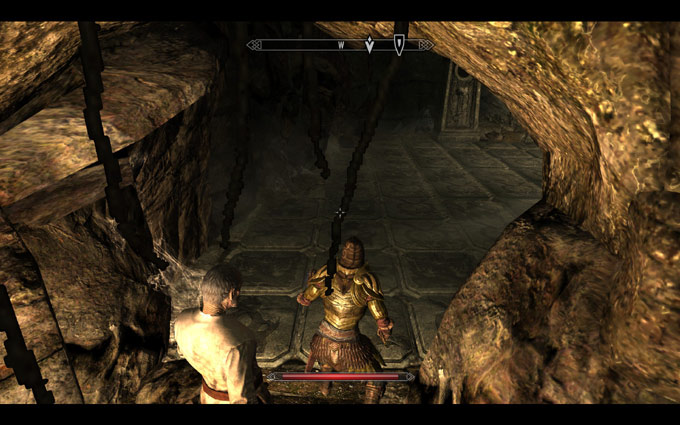 Cross the bridge with Esbern and Delphine. Go up some stairs and arrive at the Sky Haven Temple. Go on the Blood Seal and activate it. Your goal now is to learn the secret of Alduin's wall. The head statue will open. Enter the passage and climb the stairs behind it. Open the door to enter the temple. Climb some more stairs. Approach Alduin's wall and wait for Esbern. He will determine that a shout was used to defeat Alduin. But he does not know which shout. Delphine will ask you if you ever heard of a shout that can knock a dragon out of  the sky. Tell her the Greybeards might know. Tell her  you will ask Arngeir if they know what shout was used.

This complete the quest "Alduin's Wall" and starts the next main quest, "The Throat of the World"